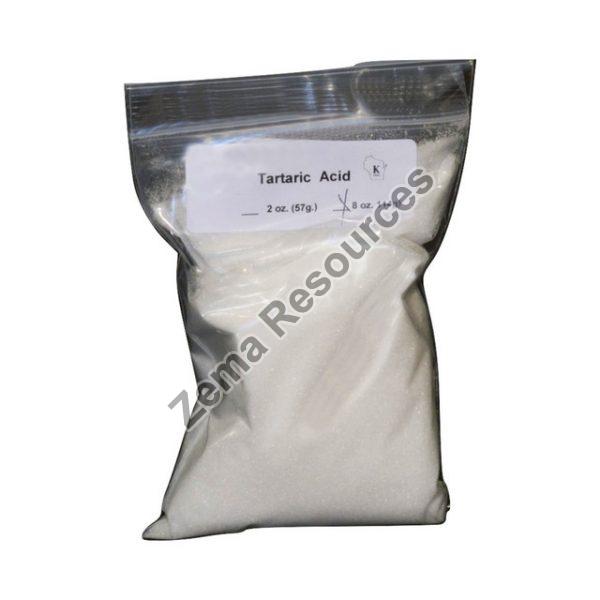 Wine Making: Tartaric acid is the primary acid in grapes. It is more tart than the other two wine acids: malic and citric. It is the acid of choice for acid adjustments.

Usage: 1 teaspoon per gallon of wine increases the acid by 0.15%.

Cheese Making: Tartaric acid is a natural vegetable acid also derived from the seeds of the Caribbean tamarind tree. It is a coagulant used for making Mascarpone, an Italian soft cheese that is made from cream and has a rich velvety texture with a sweet delicate flavor.

Tartaric acid — formally known as dihydroxybutanedioic acid is a naturally occurring organic acid that’s found in a number of fruits and plants including bananas, grapes, citrus, and tamarinds. Its basic chemical formula is C4H6O6, and its structural formula is HO2CCH(OH)CH(OH)CO2H.

The salt of tartaric acid — potassium bitartrate or cream of tartar — is a natural byproduct that’s formed during the winemaking process. When blended with sodium bicarbonate, it is used as a leavening agent — in the form of baking powder — in food preparation. Tartaric acid has the E number E334 and is used as an antioxidant in the food industry. Due to its palatable sour taste, it is also used as a flavoring agent.

The first known production of tartaric acid was from the residues of winemaking around 800 A.D. In 1769, a more modern production process based on fermentation was developed by Carl Wilhelm Scheele. For more information or access to high-quality tartaric acid from a trusted specialty and chemical distributor, contact Brenntag North America.